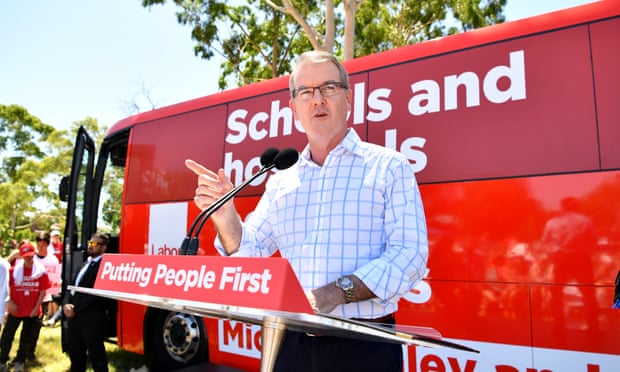 A New South Wales Labor government would establish a state-owned renewable energy company to support the rollout of enough renewable energy to power more than three million homes across the state in the next decade.

On Monday the NSW opposition leader, Michael Daley, announced that if elected on 23 March, Labor would deliver seven gigawatts of extra renewable energy by 2030.

Labor would also establish a new state-owned power company to deliver a further one gigawatt of renewable energy and storage.

“I want to make NSW a global leader of the clean energy industry. I want NSW workers and families to reap the benefits,” Daley said in a statement.

“NSW cannot be a supplicant state for energy. We have to produce our own energy, create our own jobs and give energy security to our own people. If we don’t move now, we will completely fall behind and lose our advantage.”

Based off modelling of a similar scheme in Victoria, NSW Labor expects to raise $9.5bn through a series of competitive tenders and long-term contracts – known as reverse auctions – in which governments invite bids for projects from developers at the lowest price they would accept.

Daley said in the announcement that the timing, size and content of each auction round would be determined in conjunction with the Australian Energy Market Operator.

Environment groups have been quick to welcome the policy, with the Nature Conservation Council calling it a “game-changer” for the state.

“State Labor’s pledge to add seven gigawatts of large-scale solar, wind and storage to the grid is a game-changer that would make NSW a leader in clean energy in Australia, slash the state’s carbon emissions by 12% and power about three million households,” chief executive Kate Smolski said in a statement.

“The ALP’s pledge on rooftop solar and large-scale renewables would see NSW go from laggard to leader in clean energy in Australia by increasing the mix of solar, wind and hydro up to 35% by 2023.

“This is a very welcome announcement and sets a standard that we call on the Coalition to match or exceed in coming weeks.”

A study by the Climate Council last year found that while NSW had a “strong pipeline of renewable energy projects with planning approval”, it waslagging behind most states in the amount of energy it sourced from renewables.

That’s despite the energy minister, Don Harwin, criticising his Coalition colleagues in the federal government for blocking his attempt to debate emissions reduction at an energy ministers meeting at the end of last year.

In December, Harwin said he was “very disappointed” with the outcome of the Council of Australian Governments energy council, saying an obligation to reduce emissions was “absolutely critical” to encourage investment in new power generation and lower prices.

The NSW Labor announcement comes after Daley last week said the party would aim to see half a million more homes in the state install rooftop solar over the next decade by allowing owner-occupied households in NSW with a combined income of $180,000 or less to claim a capped solar rebate.