Get a Solar Battery quote in 60 seconds!

In the next step towards greater grid stability for South Australia, the highly anticipated and long awaited Tesla Powerwall 2 battery installations have commenced in both residential and commercial premises with Australia’s leading solar and battery power installer, Natural Solar carrying out some of the first major installs across the state. 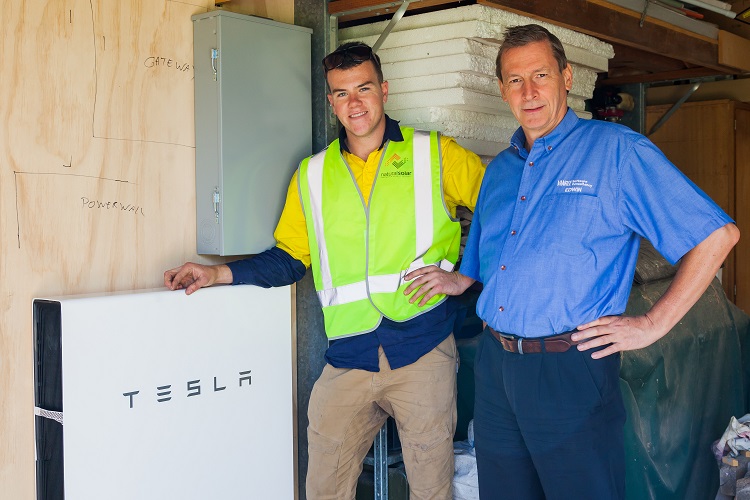 “Since Tesla Powerwall 2 was first announced in October 2016, there has been a huge consumer and commercial demand for the next iteration of Tesla Powerwall,” says Chris Williams, CEO and Founder of Natural Solar. “At Natural Solar, we have been inundated with enquiries from people around the country as we move further into a more mature battery powered future with a proven track-record of results, return on investment and savings.”

Since March 2017, when the South Australian energy crisis was at the height of its media attention, demand for battery power from Natural Solar customers (www.naturalsolar.com.au) has increased in that State by 300% alone compared to the rest of Australia.

“Natural Solar has clearly identified South Australia as a market that will benefit greatly from the energy storage revolution, greater grid stability and uptake of both residential and commercial energy storage solutions. As we roll-out the first series of Tesla Powerwall 2 installations around South Australia we are seeing the overwhelming majority of our customers within this market are opting for backup power with their home battery, versus home owners in other states and territories,” says Mr Williams.

Tesla Powerwall will allow consumers to store solar energy during sunlight hours, allowing homeowners to use it at night and avoiding the need to sell excess energy to the grid. The functionality of Tesla Powerwall 2 has improved considerably with an inbuilt inverter, easy installation, Tesla app for monitoring and control and now offering 13.5kWh of the storage capacity.

One of the first Tesla Powerwall 2 installations in South Australia will occur for Edwin Van Ree of Wilunga, South Australia. His installation including two Tesla Powerwall 2 home batteries will be used to power his home, as well as his home office from where he runs his IT Consultancy business with two employees. For Mr Van Ree, the benefits of a solar and battery home storage solution are two-fold, not only will he achieve savings but further independence from the grid allowing his business will be able to run uninterrupted no matter the state of the network.

“The commercial battery market is rapidly increasing, with over an 800% increase in commercial enquiries this financial year. The ability to continue to function during ever increasing grid outages is highly sought after by small to medium businesses as the impact on their business due to outages is at an immeasurable financial and reputational cost,” says Mr Williams.

Also set to receive his Tesla Powerwall 2 in the coming days is Trevor Roach of Wakley Heights, South Australia. Mr Roach’s residential installation includes additional solar panels, a Tesla Powerwall 2 home battery and 15 x 265w panels added to his existing 3kWp system. Mr Roach’s motivation to move from purely a solar solution to the integration of battery power is driven by the savings associated with installing Tesla Powerwall 2 and the anticipated 6-7 year return on investment for his own renewable energy storage solution.

“It’s been 18 months since we saw the initial Australian battery boom, and since then there has been a huge national and political discussion on battery power and the impact this has on the Australian population and consumers. Mass adoption of residential and commercial batteries is already underway and considered to be the new ‘norm’. Rarely do our customers at Natural Solar enquire for just solar anymore, and this is even more evident in South Australia. Smart batteries, grid integration and community grids are the next step in Australia for renewables,” says Mr Williams.

“It is clear the market has transitioned from an early adopter market to an early majority market, where substantial and proven savings results and a strong ROI can justify the purchase of these solutions. Australia is a clear leader globally in the energy storage revolution, thanks to skyrocketing electricity bills, an abundance of sun hours and falling battery prices,” concluded Mr Williams.