Just days after Tesla announced it was taking orders – and down-payments – for its much-hyped and quite good looking solar roof, an Australian made printed solar innovation that could rival Elon Musk’s power generating tiles has moved one major step closer to commercialisation. 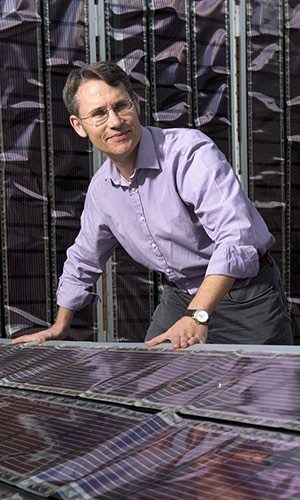 A University of Newcastle team of researchers has this week launched Australia’s first large-scale demonstration of printed solar panels, as part of a final phase of testing and modifications of the potentially ground-breaking renewable energy technology.

The UON team, led by Professor Paul Dastoor, has pioneered both the electronic ink and the printing process over a period of more than 15 years, and is now testing the printed solar panels across a 100 square meter site at the UON campus.

As you can see in the video below, the printed “panels” are so light that they were tethered to the roof and walls of the demonstration site by velcro strips, and Dastoor explains that the labour involved in its ‘roll-out’ is exactly that…’rolling out’ a long sheet of the laminated material.

The launch of the demonstration project on Monday, he said, brings the technology one step closer to commercialisation and puts Australia at the head of the pack on printed solar.

“This installation brings us closer than we have ever been to making this technology a reality. It will help to determine the lifespan of the material and provide half-hourly feedback on the performance of the system,” said Professor Dastoor.

“There are just three demonstration sites at this scale that we know of anywhere in the world, so Australia has joined quite an elite group of global leaders poised to make this technology a commercial reality.”

Among the key benefits of the technology are that it can be rapidly – and cheaply, at a production cost of less than $10 a square meter – manufactured, enabling accelerated deployment into the marketplace.

“The low-cost and speed at which this technology can be deployed is exciting, particularly in the current Australian energy context where we need to find solutions, and quickly, to reduce demand on base-load power,” Dastoor said.

“No other renewable energy solution can be manufactured as quickly. On our lab-scale printer we can easily produce hundreds of metres of material per day, on a commercial-scale printer this would increase to kilometres.

“If you had just ten of these printers operating around the clock we could print enough material to deliver power to 1000 homes per day,” he said.

The low-cost and portability of the technology also makes it an ideal candidate for roll-out in developing countries and in cases of disaster relief, where power is needed quickly and temporarily.

A further advantage of the UON’s solar ink is that it is “more sensitive” to low levels of light.

Professor Dastoor says that unlike traditional PV panels, the technology produces a more constant power flow in low-light and cloud cover – and can even generate small quantities of energy from moonlight – therefore exposing users to less dips in productivity.

But the UON demonstration site will, for the first time, allow researchers to monitor how large areas of these unique printed solar cells respond under different real-world conditions.

Depending on the outcome, Dastoor also believes that the innovative technology could inspire a new service delivery model, removing key barriers to solar uptake in the community.

“It might operate like a telephone line, where customers choose a service plan based on their usage requirements but do not need to outlay the physical cost of the line installation and associated upkeep. The system is owned, maintained and updated by the provider and customers could scale their plan up or down as their requirements change,” said Professor Dastoor.

“By reinventing the delivery model we remove the need for initial lump sum outlays, overcoming the key barrier to community uptake and ensuring that the science actually ends up on our rooftops,” he said.

This article was originally posted on http://reneweconomy.com.au/uni-newcastle-team-tests-printed-solar-panels-in-australian-first-50301/