The first Tesla Powerwall battery system to be installed in Australia is impressive enough, a 90% + saving on the power bills is even more impressive. That’s just what Nick Pfitzner from Sydney has experienced being the first Tesla Powerwall owner in Australia and saving a massive amount on his electricity bill. And now this has been analysed by the Australian media in great detail – their verdict IMPRESSIVE!

Thoughts from a Powerwall owner
His latest electricity bill in the post, Nick Pfitzner was pleased to see the amount to be paid was a mere $50.39 (Incl. GST). Compare this to his previous bill for the same quarter last year and Nick was facing a bill totalling $660.77 (Incl. GST), which means his family had a saving more than 90 per cent.

Nick has kept a blog detailing the various events and findings during his ownership and has some very good advice to other people with or looking to install a Powerwall. Nick says:
“As I’ve learned a bit more about the Powerwall, I’ve also tweaked some of the larger hardware pieces to exist in harmony with each other and the solar system in general.

For example, the pool pump needs to be running for a certain number of hours per day to ensure cleanliness, and takes about 0.8kWh at standard operation. I’ve worked out the pump capacity (Qmax) and rate of flow correctly, to ensure I use only the minimum hours per day. I also figured out that running it later in the day allows the battery to top up earlier as the panels start cranking up the flow mid-morning.

In partnership with this, the timer on both our washing machine and dishwasher are set for the early afternoon, when the sun is at its highest. I leave a gap in the pool timer of 2 hours in the middle of the day so both these devices can run without issue, even when the sun isn’t so bright.

As always, a solidly overcast day can throw some of these plans out of alignment, and that’s why a grid connection is a must. Beyond keeping the warranty of the Powerwall at 10 years (off-grid is only 4), in suburbia there is simply no reason to disconnect, with the grid as your reserve.” 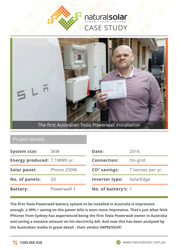