Brian Gillespie lives in a part of South Australia close to Adelaide. The area is an energy blackout zone with regular outages to the electricity network. Having already had a solar system installed Brian wanted to add a Powerwall home battery as an addition to his solar. Natural Solar were able to provide the technical skill to install the Tesla Powerwall in an AC coupled backup configuration.

Background
With the ever present threat of Blackouts becoming more frequent throughout Australia it is good to know that a solution has been tried and tested. For Natural Solar customer Brian Gillespie from South Australia, it was a complete shock to find out that for the previous three hours the rest of his neighbours had been in complete darkness. Why … because Brian has a Tesla Powerwall and whilst everyone else was suffering from the lack of power he was lighting his home and watching TV as normal. In fact Brian has stated that his Powerwall can stay off-grid for 10 hours without any issues supplying his home with useful energy to run lights and the television.

Adding a Powerwall to a system
One of the main reasons Brian came to Natural Solar was to purchase a Powerwall, his reasons were to beat the many blackouts experienced in and around the area he lives. However, the statewide blackout was very severe and many 1000’s of South Australian’s were left without power for a considerable time.

Backup Circuit
Brian’s backup circuit in his home is used exclusively for when the power fails and contains his house lights and a few power points for the TV and other smaller electrical appliances. Brian only discovered that there was a power outage whilst watching the news, he said he opened the oven door to see that the light wasn’t working. 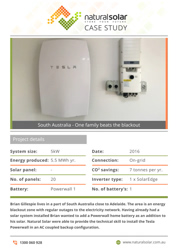