Nearly two-thirds of all solar storage systems sold in Germany come from these four suppliers. According to EuPD Research, about 16,800 photovoltaic storage systems were sold in the country in the first half of the year. Falling prices and an attractive rooftop market are driving demand upwards. 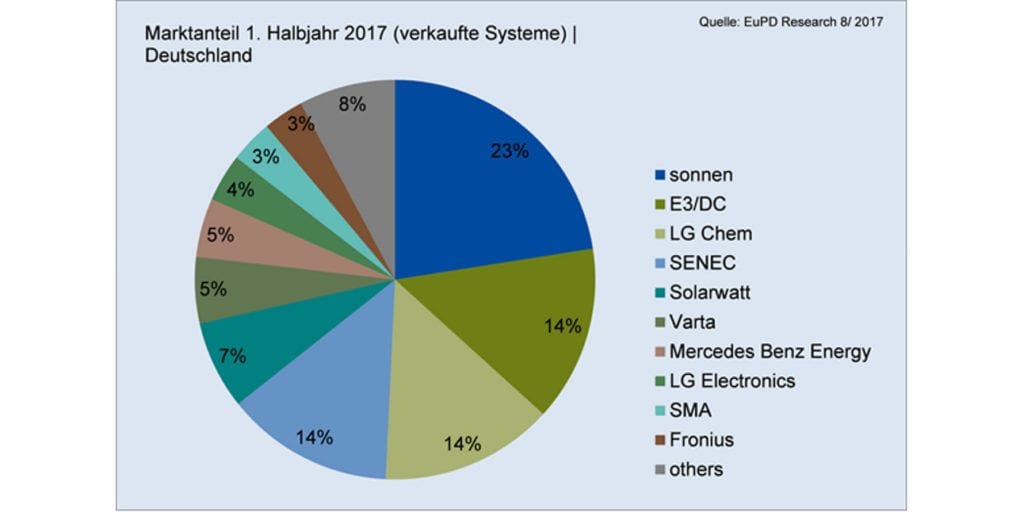 Demand for residential PV is growing in Germany, and with it also the installation of storage systems. According to market analysis conducted by EuPD Research, a total of 16,800 storage systems were deployed in the first half of this year in the country.

sonnen continues to be the leading provider of PV home storage systems in Germany with a 23% market share, an increase of 1% compared to full year 2016. Second place is occupied by (Senec), E3 / DC and LG Chem with a market share of 14% each. Around two thirds of the storage systems sold in Germany in the first six months of 2017 came from these suppliers.

The increase in sales was attributable to the substantial growth in small rooftop PV systems ranging in size from 3 kW to 10 kW. In this segment, 22,200 installations were installed in the first half-year (up 28% y-on-y), according to the German analysts. On the other hand, prices for PV home storage have fallen further. The decrease of the KfW storage subsidy as of June 1 also had a “sales-promoting effect”.

Overall, the analysts raised their expectations for the development of the German PV storage market for the current year, again. EuPD Research now expects 33,500 newly installed systems for this year.

“In addition to Germany, further sales for storage in Europe are showing a positive development, which is mostly flanked by public funding programs,” says Martin Ammon, Head of Energy Economics at EuPD Research. According to sonnen, the 16,800 newly installed PV home storage systems represent 75% of the total volume in Europe. “We are very pleased with this result and that we can further extend our lead to the direct competitors,” says Philipp Schröder, Managing Director at sonnen.

According to EuPD research analysis, Solarwatt is ranked fifth among the largest storage providers in Germany with a market share of 7%. Varta and Mercedes have a percentage of 5% each. The top 10 are rounded out by LG Electronics, SMA and Fronius